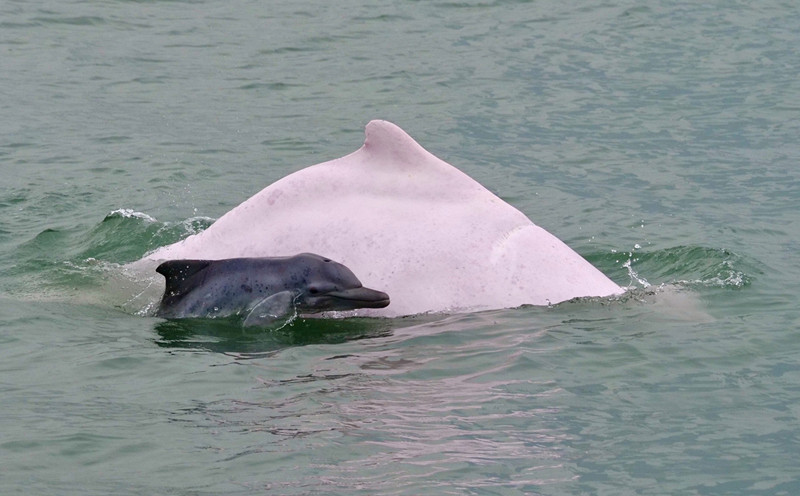 Dabai, a Chinese white dolphin, plays with her baby in the waters off the coast of Xiamen, Fujian province. XINHUA

In the calm bay waters off the coast of Xiamen in East China's Fujian province, a pair of white and grayish dolphins can often be seen frolicking, attracting many to marvel at the stunning aquatic mammals.

"Look! The white one is Dabai, and the gray one is her baby. She is playing with her baby," said Wang Xianyan, a researcher at the Xiamen-based Third Institute of Oceanography of the Ministry of Natural Resources, pointing at a video on his mobile phone.

Dabai is a Chinese white dolphin living in Xiamen Bay. The mammals are protected under first-class State protection in China and were included on the International Union for Conservation of Nature Red List of Threatened Species in 2008.

According to Wang, despite being called white dolphins, newborn calves are actually gray.

As a researcher of Chinese white dolphins for more than a decade, he has taken countless videos and pictures of the dolphins.

In Xiamen Bay, the living environment for white dolphins overlaps with the range of human activities. Xiamen is the only city in China where people are able to see dolphins close inshore. In other provinces and regions, such as Guangdong and Guangxi, people are able only to observe dolphins in the open sea by boat.

Protecting white dolphins is a task that has taken decades of persistence and dedication.

According to Cai Libo, director of the Xiamen Chinese White Dolphin Amphioxus Nature Reserve Affairs Center, the provincial white dolphin reserve was set up in Xiamen to lure back the rare mammals in 1997. In 2000, it was upgraded to a national-level nature reserve for rare marine species, covering 7,588 hectares.

Measures including fishing bans were also adopted to reduce the impact of human activities on the dolphins' environment. Ecological measures such as the restoration of mangrove wetlands have also expanded their habitat.

"White dolphins are the top predators in the ecosystem and an indicator species of ecosystem health. In Xiamen Bay, an area with a lot of human activity, the white dolphin population is stable and increasing, which indicates that the ecosystem here is relatively healthy," Wang said.